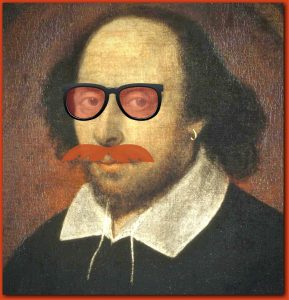 Little Revolt wants to create many types of theater. But early modern theater, and specifically the plays of William Shakespeare, bring us joy. We have performed Shakespeare and have taught his work to both students and adults. Our signature event, Shakespeare’s Birthday Celebration, is held in April and includes performances, storytelling, dance, art workshops and more.

As a new theater organization, Little Revolt is still defining itself, and I am sure our programming will evolve. Our first group of shows included ‘James and the Giant Peach’ based on the Roald Dahl book, as well as ‘A Midsummer Night’s Dream’ and ‘Twelfth Night’ by William Shakespeare. These initial shows were creative, literary, and fun. A friend described our productions as “organic”. Whether or not he meant this as a compliment, I love the description. Organic is right. We are theater of, for, and by the people.

For more than 400 years, theater groups around the world have staged the plays of Shakespeare. People have interpreted his works in countless ways, and performed them in multiple languages — in theaters, at festivals and in parks. He has been called a “genius” and “the best writer in the English language.” He is an icon for many, a passion for some, and even a bane for others. I recently heard someone proclaim joyfully at a workshop, “Shakespeare is my life!” While others react with terror at the thought of watching a Shakespeare play. One of my friends referred to Shakespeare as an “industry.” There are in fact scholars and writers across the globe who make careers by researching and writing about Shakespeare. So why is it that we include Shakespeare in our work? We are happy you asked.

For the Fun of It

There are many reasons why Little Revolt includes Shakespeare in our programs. The simplest of those reasons is: We think Shakespeare is fun. His plays provide us with comedy, thrills, drama, action, music, and dance. Here I must take a moment to recognize the fantastic work of the American Shakespeare Center in Staunton, Virginia. I have visited the ASC many times, enjoyed shows, watched rehearsals, attended lectures and workshops, and I always leave the ASC energized and thrilled with the possibilities of Shakespeare. Although Little Revolt is different from the ASC (and much smaller), we hope we can share some of that same excitement with our local community in Miami.

Why do so many people think Shakespeare is boring? Likely, they have not yet experienced Shakespeare in a positive way. We love English and Literature teachers (a lot). However, we believe that sitting in class and reading a Shakespeare play is a sure way to kill him. Rather, we encourage “Doing-Shakespeare-up-on-your-feet,” or “Watching-Shakespeare-right-in-the-middle-of-the-action,” or “Having-a-riotous-time-enjoying-Shakespeare.” You can choose to read, analyze, study or pontificate on his works. We encourage it, if that’s your thing. But, Shakespeare wrote sonnets and plays, and they plays were intended to be, well, played. Ergo, we believe playing is the best way to enjoy Shakespeare.

Another reason we focus on Shakespeare is that it fits nicely with our goal as a nonprofit arts organization. We aim to involve everyday people in making theater, to challenge people’s assumptions, to educate, to help people grow, to build ensembles, to encourage play, and to make the world a little bit better. Shakespeare’s plays support our goals perfectly. We hope to demystify Shakespeare. We want to demonstrate through action that Shakespeare is absolutely fun, hilarious, beautiful, poignant, and thrilling.

Of course there are many types of theater which can be challenging and rewarding. But we believe doing Shakespeare adds a wonderful layer of richness. Doing Shakespeare makes us better people after having grown through the experience. For many people Shakespeare’s plays can require a little more effort to enjoy them. But like many things in life, the best things often require just a bit more work. Little Revolt supports the process of groups (young and old) growing together to understand Shakespeare by doing Shakespeare.

Blasts from the Past

At Little Revolt we also believe that a focus on classical theater is important. Sure, modern, innovative theater is wonderful, but if we do not practice and encourage the classics, we run the risk of losing them. Carey Perloff, Artistic Director of the American Conservatory Theater in San Francisco, has argued very eloquently, “It would be a fantastic thing in this country [the United States] to re-embrace classical theater in all its plurality and diversity.” You can listen to an interview with her online here.

Many in the theater world sing the praises of modernity and technology. People say that the digital age has ushered in exciting new types of storytelling. They are right. London’s Globe theater now broadcasts shows online across the planet. We can eavesdrop on a modern re-tweeting of ‘Romeo and Juliet’. The Royal Shakespeare Company dazzled audiences with digital magic in a recent production of ‘The Tempest’. We support all of these new ways of engaging people in stories. However, we also believe that the oldest type of storytelling, simply a group of people gathered around performers, is still the best type of storytelling, and probably always will be.

We intend to follow original staging conditions or “original practices” (when possible) during Little Revolt’s Shakespeare performances. Here are several examples: We utilize universal lighting (so that the audience can see the actors, the actors can see the audience, and audience members can see each other). Our actors are encouraged to interact with the audience. Little Revolt often “doubles” actors in multiple roles. We like to end our Shakespeare shows with a jig. We offer gallant seating (right next to the sides of our stage area) and “groundling pit” seating down front (but on comfy blankets) for audience members to see the action up close. While we love beautifully designed theater, our budget doesn’t allow for elaborate sets or special lighting. We think original staging conditions help recreate a special magic on their own, and provide a rich experience similar in many ways to the shows during the time of Shakespeare.

Many people like to put Shakespeare on a pedestal, but at Little Revolt we do not. Don’t get us wrong. We love the guy, and the more we study and practice his plays, the more we are amazed by his genius. He was a gifted writer and dramatist. We are lucky that so much of his work has survived for us to enjoy today. However, we also think he was . . . well, just a person – a guy writing plays, pursuing his craft, running a theater, making a living. Although Shakespeare became quite popular during his lifetime and eventually grew to be somewhat wealthy, we believe, mostly, he was just a person doing what he loved best – making theater. His goals were to entertain his audience, to make them laugh, to thrill them, to earn the respect of his peers, and to sell tickets. He also wasn’t perfect. (We can relate.) So we think a healthy approach to Shakespeare is not to treat him as a god; but rather, to respect him as a normal human person, and to appreciate his wonderful gifts as a dramatist.

I will close this essay by sharing a few of my favorite Shakespeare / Little Revolt memories so far:

2 thoughts on “Why Little Revolt Does Shakespeare”